To all of the bad Mothas out there, please accept a Mother’s Day gift that keeps on giving: the key ingredients to write an amazing rap song. When you rake in millions for your ghetto fabulous track, I ask that you please send me 35% of your earnings.

How to Write a Rap Song

1. Establish yourself: You must, and I repeat MUST, yell out your area code between 4-6 times throughout your song. If you don’t, people won’t know where you’re from. Helpful hint: if you hail from a small suburb, use the big city’s area code instead. Street cred is everything.

2. Brand yourself: Once you’ve recorded one song, thereby establishing yourself, begin referring to yourself by nickname only. “Ursher, baby!” “It’s Weezie!” “HOVA!” Additionally, it’s important to have a gesture or sign to accompany the name.

Jay-Z throws up his “Hova” sign, as does the large man in the background. Contrary to popular belief, Jay-Z is not a Geometry teacher with an affinity for the triangle.

3. Announce yourself: Insert a distinct mating call as part of your lyrics. If you really want to compete in today’s rap game, you’ve got to stand out. The easiest way to do this is to yell out something incoherent. I have no idea what Pitbull is yelling in every. one. of his songs, but it sounds a lot like “dolly.” For some reason, I don’t think that’s what he’s saying, but he has a lot of money, so let’s go with it.

4. Rhyme party with Bacardi: It doesn’t matter what you’re talking about, just throw these two words together and you’ve got yourself a platinum album.

5. Opposites attract: Depending on the level of your bad ass-ness, you’ll want to collaborate with someone who is a stark contrast to you. If you’re a Will Smith kind of rapper (i.e.: you will drop eff-bombs in your movies, but not on your albums), you’re gonna wanna go ahead and grab Lil’ Wayne. If he’s still alive. Is he alive? Anyway, if you’re more Eminem-esque, (i.e.: every other word out of your mouth is one that would make your grandmother cry), try hooking up with someone like Carrie Underwood. The lyrics will sound something like this:

Carrie: Reach for the moon/ Even if you miss, you’ll land among a pick-up truck I bashed in with a baseball bat.

Eminem: I’ll set dat bitch on fire/ You’ll find her in my mother f*ckin trunk/ I’ll do it ‘cuz I love ma daughters.

The duo is so crazy that it will work; white kids everywhere will love it. 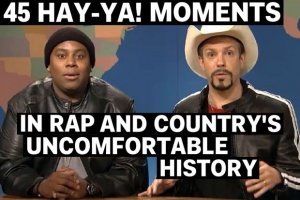 6. Brag: Buy a push-button car, expensive clothes, or black diamonds and rap about them. A lot. And then remind all of the other poor, struggling rappers that they’re nothing until they’ve got gold in their mouth and chains on their neck. This may incite a string of thefts, but it’s in the name of  rap.

7. Get poetic: Figurative language goes a long way. 50 Cent gets it: “I love you like a fat kid loves cake.” What’s up now, Emerson? Rapper Drake prefers the metaphorical route: “the game needs change and I’m the cashier.” Can you get with this, Whitman?

8. Come up from nothing: If you’re middle-class, attended school on a regular basis, and/or volunteered in the neighborhood watch, you are not eligible for come-uppance.

9. Hate someone or something: The police, the president, me–just focus your intense hatred on something and throw it into every song.

How To See Previous Posts

The Official How To Blog